We are exposed to harmful bacteria, mold and allergens that prosper in our offices, our placed of educations, places of our leisure activities and anywhere away from home . These health risks are well documented and tagged as BRI – Building Related Illness.

Betterair conducted more than a dozen in-depth  microbial field studies to measure the impact its Enviro-Biotics of improvement  of  facilities’ microbiome, creating a healthier and safer indoors space. Each study incorporates collection of hundreds of samples, providing solid data that is based on sufficiently large number of samples collected

Our field trials clearly demonstrate the significant reduction in the presence of harmful bacteria, mold and allergens, each contributes to our building occupants’ illnesses. The acute suffering of building occupants inflicts financial damages of $ tens of billions in lost productivity due to presenteeism and increased absenteeism.

The following is a sample of 3 different type of clients, each of a different industry:
Police force, a producer of health and food supplements, and a large attorney at laws offices

This study and consequent treatment were ordered by the Chief Medical Commander of the Police force.
His appreciation is given over a formal letter that is part of our testimony folder

Few offices were chosen across the police headquarters campus in Jerusalem. Measurement of contamination level were conducted before and after treatment, and samples were analyzed at the Hayes microbial laboratories in the US. The results are summarized by n the graph below. The Green bars represents the measurement on same spots 12 weeks into the space treated with Enviro-Biotics®

The Pretreatment condition, depicted by the Red solid columns within the graph below, clearly demonstrates the high degree of contamination of the facility – high degree of allergy producing molds such as Alternaria and Aspergillus (both known as molds that generate conditions for Asthma) and Pathogenic bacteria such as Pseudomonas and Staphylococcus among others created an unsafe space for its inhabitants. It is easy to observe the absolute decrease of these dangerous pathogens and allergens to a level undetected by the laboratories;

both surface and air sampling were collected at the office. Samples of Before and After treatment were taken accordingly on a 2-month timeline and about 75ml of Envirobiotics were dispersed during the specified time, treating a 82 square meters space of 2.8 meters ceiling

The Pretreatment condition, marked Red within the graph below, clearly demonstrates a notable representation of pathogens that do not bode well for wellbeing of humans:

Rhodotorula, Staphylococcus sp., and Yeast  are all tied to increase of allergenic reaction and other diseases (include food poisoning) 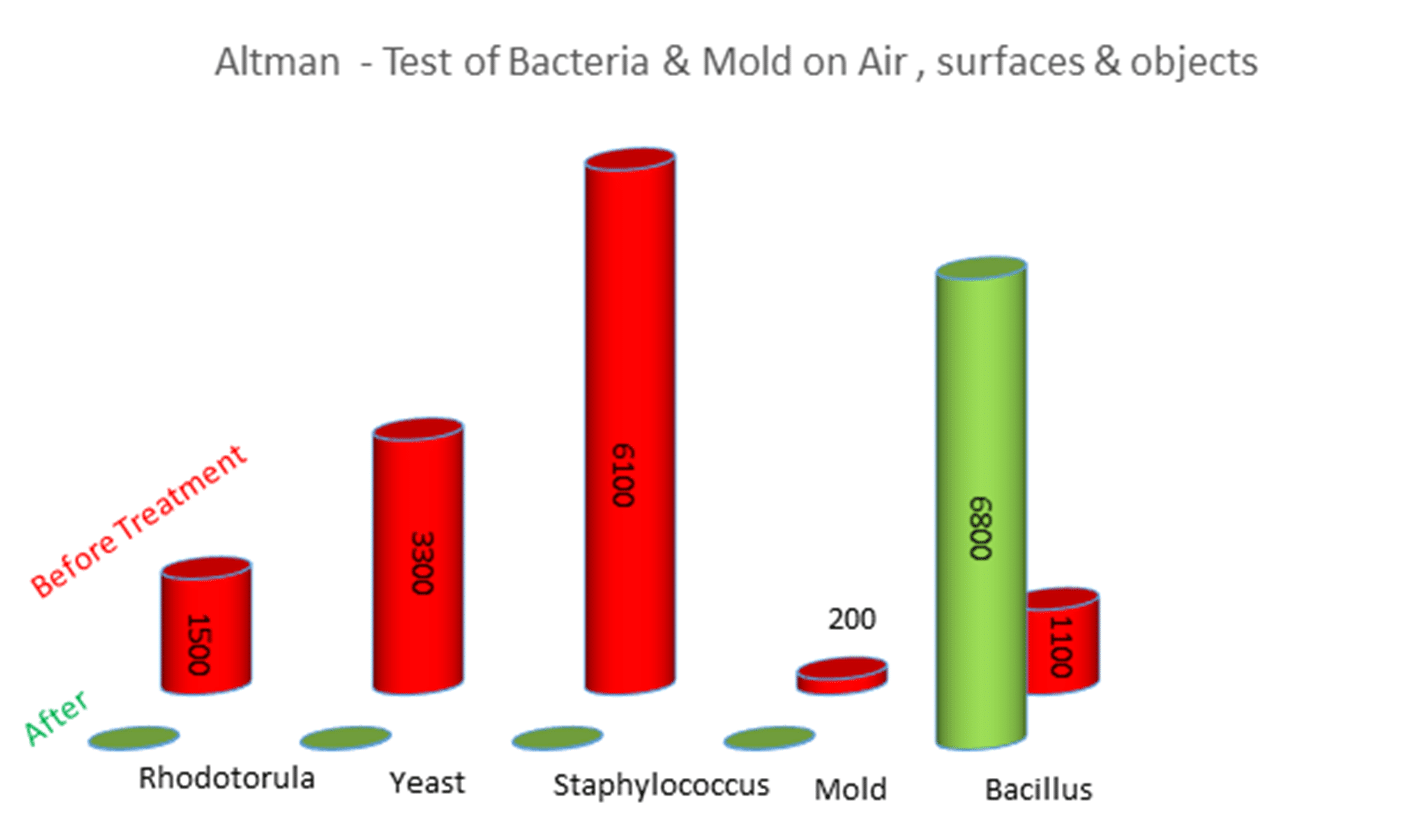 Samples of air and surfaces were collected over 500 sqm of  selected office space. In addition,  samples of its central HVAC airducts that provides for all the offices of Caspi & Sror were collected too.

Sample were taken prior to Enviro-Biotics treatment and the final collection were done after three months of treatment and represented by the  addition, samples graphs below. It clearly shows that all pathogens were reduced and virtually vanished following the 3 months treatment of space 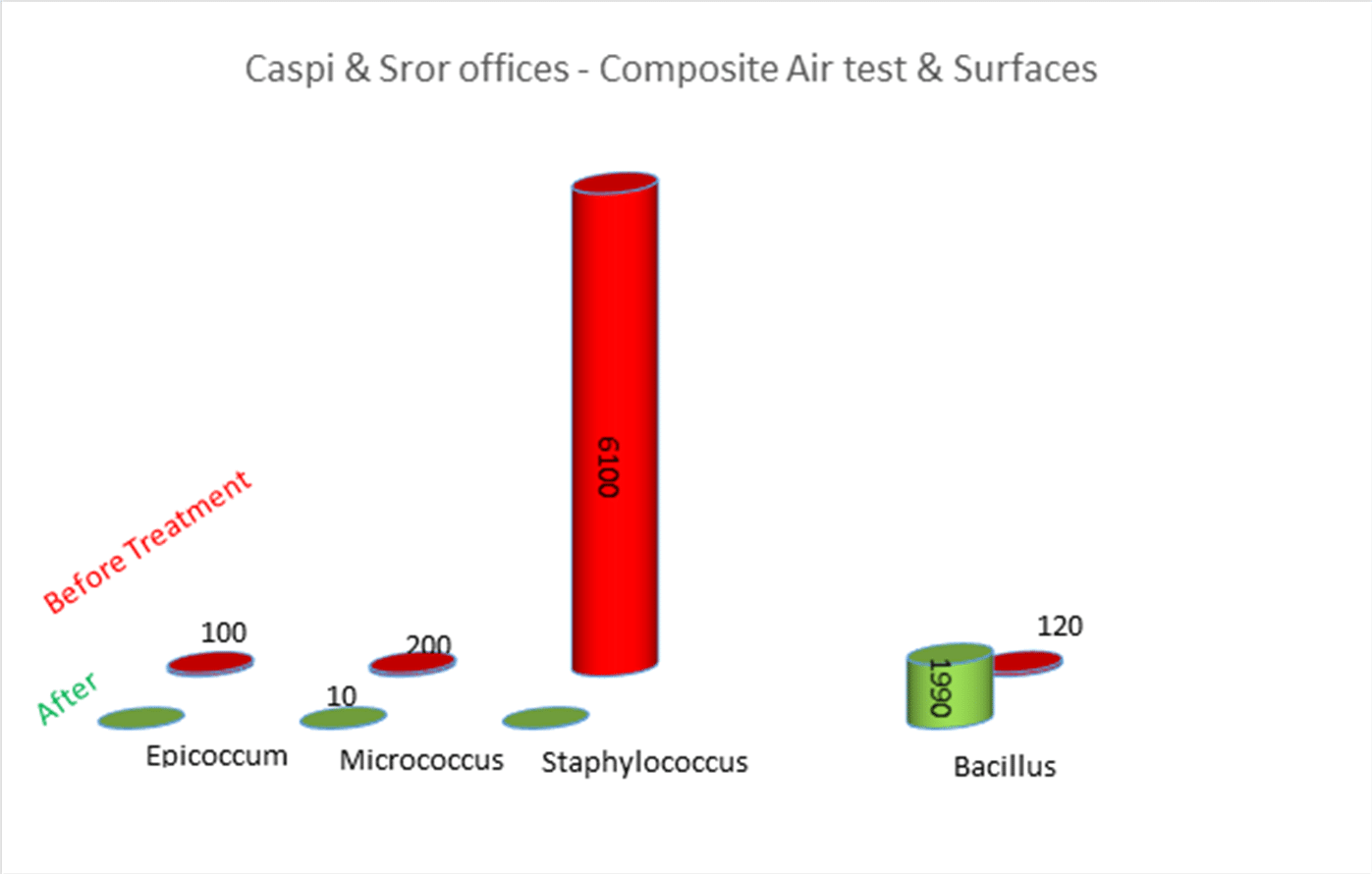 we are Here To Assist You

Need help, we are here for you

Feel free to contact us, and we will be more than happy to assist all of your questions.